U.N. Must Crack Down on Covert
Acts of War 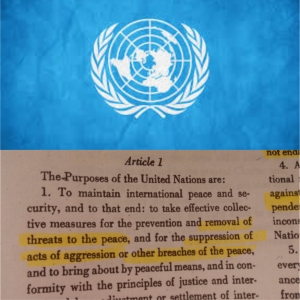 How is “covert action” by the U.S. CIA legal?

Someone justify the U.S. hosting an international body like the UN, committed to Peace and composed of peace-loving nations.

What besides belligerent pride and ethnocentric “exceptionalist” delusions is challenging the United States and its representatives from following UN resolutions?

From following a due process of law regarding international war crime suspects, instead of extrajudicial bombing of suspects?

Please join Sacha Llorenti and people like him who carry the UN Charter with pride, putting world peace ahead of U.S. passion, sometimes good—sometimes misguided.

And please consider apologizing officially to nations we have attacked with covert operations, like Guatemala, Iran, Chile, Vietnam, El Salvador.  Illegal CIA intervention into other sovereign nations’ politics has been disclosed and made public.

I fail to see any apologies.