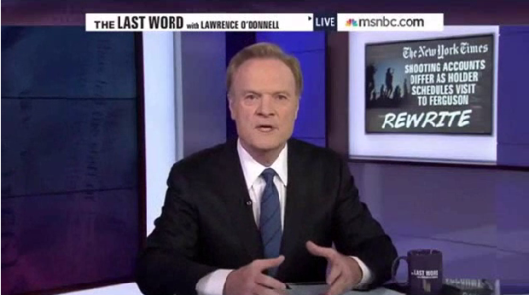 Frankly, I’m writing for an old principle brought up in the news this week repeatedly.  When the concept was discussed, it was done so with a negative light about it:

A next door neighbor to loyalty is gratitude.

And while the suspicious Donald Trump throws the term around like a mob boss seeking favors, MSNBC’s veteran star, Lawrence O’Donnell, deserves the word’s best connotations.

I started watching Lawrence just this year, I won’t lie.  In fact, Ari Melber was guest hosting his show when I picked up the 10 pm EST slot habit.

Ari was great, a tough act to follow when Lawrence came back from a break, but ever since, I can see why Lawrence has been so successful.

O’Donnell not only engages, but is a consummate team player.  Has humility and grace.  Knowledge of law and policy.  A lawyer’s affinity for argument, goes farther than a moderate would go to make some points—but that is who he is, at MSNBC since their start in 1996!

Goes all the way back to the beginning of the channel.

Why I hope he and they work out a win-win deal for both parties as they discuss contracts this month.  There’s really no reason for someone like me to chime in on an adult’s relationship with other adults.  They will do what they do, but…

Lately in life and in business, I smell so much greed and ADD, that I fear decisions get made not from love but from… Greed and ADD.

The doom of men is that they forget.
—Merlin, Excalibur

Don’t forget, MSNBC.  Don’t forget how you started, and who chipped in, who supported and sacrificed, who does what the team needs to be done, who is an elder statesman who might want to move on on his own terms soon, anyway!!!

Because that is what a team player does.

Lawrence O’Donnell is skilled to be the number one guy somewhere.  But there he is on MSNBC, on deck after that channel’s number one, Rachel Maddow.

He revels in supporting her, is grateful for her skills, and tells her often not just as a newsman should, but as a Nice person anywhere should.

Within reason, and under God’s good guidance, I hope that he not greed and ADD, will decide when and how to leave.