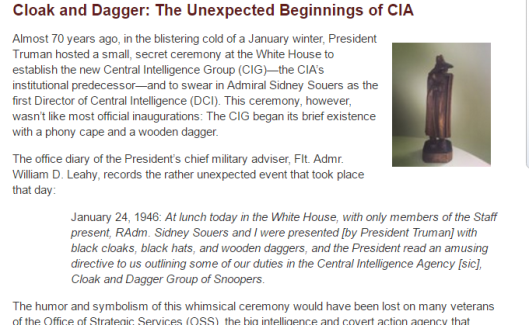 Regarding the murder of John F. Kennedy on November 22nd, 1963:  all credible evidence and testimony point toward CIA.

A group committed to revenge for the Bay of Pigs fiasco, and Kennedy’s lack of air support to that CIA failed mission.

Killing JFK to them also seemed the only chance for escalation in Vietnam, continuance of a kill Castro program, a possible calming down of liberal de-segregation policies and peaceful globalism.

Finally, war of course meant money to CIA and military personnel they controlled.

That control was a creeping death, unleashed by Truman in 1947, two years after a beautiful peace document was signed by the United Nations in San Francisco to hopefully avoid all wars.

From the CIA site:

January 24, 1946: “At lunch today in the White House, with only members of the Staff present, RAdm. Sidney Souers and I were presented [by President Truman] with black cloaks, black hats, and wooden daggers, and the President read an amusing directive to us outlining some of our duties in the Central Intelligence Agency [sic], Cloak and Dagger Group of Snoopers.”

Nobody laughed in Guatemala when Howard Hunt and other CIA spooks perpetrated a covert propaganda campaign to influence the 1954 election.

Wherever there was communism, socialism or any “ism” uncomfortable to CIA and American capitalist expansion, there was the CIA operating with their apparent blank check covert cloaks and daggers.

El Salvador and Vietnam would be future targets of CIA manipulation, BUT NOT UNTIL KENNEDY WAS KILLED.  Kennedy was a fly in their poison, so they geared up Operation 40’s “kill Castro” objective to turn on JFK.

Guns in cars, disguises, cover as policemen and secret service officers, trained to kill Castro.  How hard would Kennedy be to snuff out in ex-Deputy CIA director Charles Cabell’s neck of the woods?  His brother Earle was the Dallas mayor at the time.

Cabell was “ex”-Deputy CIA director because Kennedy fired him after the Bay of Pigs disaster.

Motive abound, the CIA—at least a part of it, moved in on JFK, who had expressed his desire to dismantle the covert cloak and dagger boys, saying “I will splinter the CIA into a thousand pieces and scatter it into the wind” a month before his death.

Then a bogus LBJ-instigated Warren Commission began to “investigate,” led by Allen Dulles, the CIA Director fired by Kennedy after Bay of Pigs.

“As long as they get distracted or forget.”