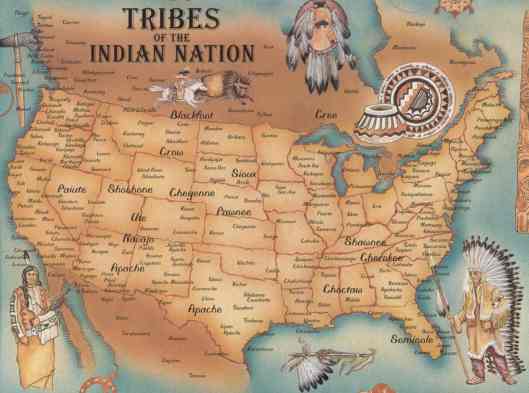 We’ve been waging war on this land ever since Columbus first “discovered and conquered” the West Indies for Catholic Spain.  First the Spanish, then the English in a land called Wingandacoa—which they changed to “Virginia” after Elizabeth I, the virgin queen, who King James loosely quotes in his first Virginia Charter of 1606:

…our licence to make habitacion, plantacion and to deduce a colonie of sondrie of our people into that parte of America commonly called Virginia, and other parts and territories in America either appartaining unto us or which are not nowe actuallie possessed by anie Christian prince or people…

“If they’re not Christian—take it,” was the attitude.  By force.  Build a fort, plantations, seek gold, bring most back to the Crown, take some for yourself, call yourself an admiral and own the land you find.  Never mind the native people and their way of life; that there was more to heaven and earth than was dreamt of in European philosophy!  Some could dismiss this all as history, if we lived in the United States of Native American Nations.  But we do not.

We live on stolen land, most of us, while its original caretakers have been pushed nearly off the map into tiny reservations.  The native people loved the land, used it wisely, moderately and with great care.  They were grateful for it, the seasons, lived in and amongst nature in a cycle of life that didn’t need books or written law codes to direct. Their art was composed by the Great Spirit; the waterfalls, valleys and rivers along with wildlife provided their entertainment and joy.

There’s the Gold, Britain!  There, the precious resource, the eternal commodities of Gratitude, Wisdom and love for the Land!

But no.  We have our bibles, our guns—they, these savages, must leave while we erect Europe Part II in this glorious land.  We’ll run our concrete and asphalt over it, build our buildings, drive our vehicles—burn the earth the natives cherished in order to go faster, higher and farther…  If there was a flame, we’d be a moth bound for it, and so there was and that flame was war.  And we are still waging that war in the city of Los Angeles, formerly Otsungna—the native place of roses.  From military to paramilitary police, we equate might with right still, pat ourselves on the back as we kill silence with our helicopters and sirens,

then we train to kill and kill our fellow human beings, if the mood strikes us, call it self-defense, say the Constitution allows us to have guns and shoot people.  Good guys and bad guys, calling ourselves Christian, while Jesus’ words echo unheard: “Only God is good,” he said, but what is he next to our own will to steal and destroy land the native people used to love and revere?  The USA is a sad ruse of stealing land, breaking from England, and playing house.

The native Great Spirit is still king here.  Get ready, if you’ve never felt it, for its proud light is soon returning, as this land thief soon removes himself.  And some day I plan to bring “gold” back to my queen or king, teach them the native ways of loving our land.