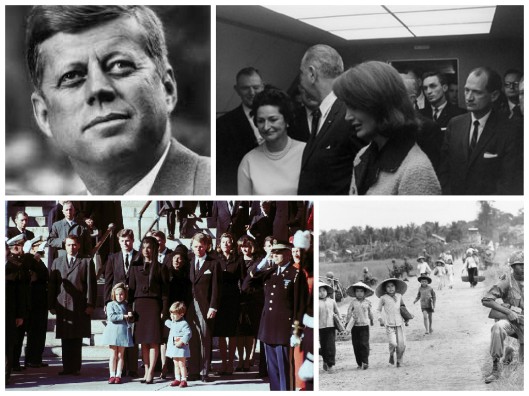 A branch of CIA, or all of it, was responsible for the murder of John F. Kennedy on November 22, 1963.  A branch related to Nixon’s Operation 40, which set out to kill Castro and re-establish a free, democratic and capitalist Cuba.

Kennedy became a big fly in the ointment of that mission, and left the American Bay of Pigs invasion without air support in 1961—causing that action to fail miserably.

Not ready to strike right away, because assassinations take planning—JFK’s enemies waited for the right time.

JFK fired CIA director Allen Dulles and his deputy, General Charles Cabell, over the Bay of Pigs fiasco.  Dulles, the single most influential “spy” in history, involved with American foreign service since World War I—ousted just like that.

Deputy Cabell, also let go, had a brother in a high place that could come into play at a later date:  his brother Earle was the mayor of Dallas.

Well, off Kennedy goes.  His part in the Bay of Pigs was an immense learning experience that shaped his final two years.  He began to tear apart the CIA, promised to pull out of Vietnam, began to reach out to the Soviet Union—achieving a nuclear test ban treaty.

But not until after the Cuban Missile Crisis, an event that further informed the new JFK policy direction so despised by the CIA and U.S. military cold war establishment:

Peace at all costs, diplomacy at all costs—wait things out, be patient, and make brothers and friends out of the world, not enemies.

Enemies give military and covert CIA operatives their jobs and money.  Think of NBC’s RCA and all those military contracts.  Food on the table for the war machinists.  And Kennedy planned to take this away from them.

Well, every fire needs a spark, and hot and sultry New Orleans seemed to provide it.  Talk, planning and collusion—call it conspiracy, became rampant and contagious among U.S. Intelligence operators there according to New Orleans District Attorney Jim Garrison’s research.

And in the Miami area:

Operation 40 training sites flourished—the same ones involved with the Bay of Pigs, even George “41” Bush and his gun-running CIA outpost, “Zapata Oil” off the coast of Cuba.  His gun transport boat, “The Barbara,” a cold war cover only Yale’s Skull and Bones brothers could appreciate.

Hot, well-trained, racist, frustrated by JFK’s refusal to kill Castro, his promises for peace in Russia and Vietnam, his reaching out to Martin Luther King and the desegregation movement—constantly thwarting and ignoring military and intelligence advisers after the Bay of Pigs, the killers planned:

TO KILL THE PRESIDENT ON HIS TRIP TO DALLAS on NOVEMBER 22nd.  Ex-CIA deputy Charles Cabell’s brother, Dallas Mayor Earle Cabell, was available to help, and Dallas authorities with a knack for being a “part of history”—albeit a violent part, would surely be willing to contribute.

According to former Castro lover and CIA operative Marita Lorenz, a two-car caravan headed west out of Miami with weapons in the second car in early November.

Howard Hunt of Watergate fame arrived in Dallas on the 21st to meet the caravan, finalize plans and dole out money, also according to Lorenz testimony.

Lorenz, who risked her life to tell her story, further testified that Oswald’s eventual killer, Jack Ruby, stopped by the assassins’ motel in Dallas on the 21st.  Marita herself split the scene, knowing what these men were about to do; she went back to her child in Miami.  But when Ruby’s photo was widely published after he killed Oswald, she knew…

Death.  Murder.  A man, president, father, husband—murdered gruesomely in front of his wife.  The fence above the grassy knoll rocking with fire and plumes of smoke.  Eighty percent of all Dealey Plaza witnesses see and hear more gunfire from the knoll than from the Book Depository, where Oswald was according to the official government story supposed to be wreaking precise and devastating terror from the 6th floor window with a defective rifle.

Oswald is caught watching a movie later in the day, a patsy set up for years since Bay of Pigs.  A poor marksman according to nine out of ten of his Marine mates.  His gun the worst possible rifle for precision—laughed at in Italy as the gun that “lost the War.”

Oswald failed the nitrate test, proving that he did not even shoot a rifle that day; and the first rifle found in the Depository was a German Mauser—unrelated in any way to Lee and his Italian carbine.

Yet the FBI presents to the Warren Commission, formed by coup victor LBJ to investigate and report on the assassination, their conclusion that “Oswald, and Oswald alone, killed JFK.”

With a bad rifle from a bad, partially obstructed position, miraculously creating frontal wounds from behind the victim.  He murders Officer Tippit while escaping, they go on to frame.  A lone communist nut.

President Johnson, the big Coup of 1963 “winner,” headed to brand new policies and a complete change in direction away from peace and deeper than ever into Cold War.

Johnson escalated Vietnam, revoking JFK’s commitment to de-escalation.  Defeating the Soviets replaced Kennedy’s dialogue toward resolution and peace.  Castro and Cuba were squeezed with sanctions after a time under Kennedy that showed a potential for friendship according to French reporter, Jean Daniel.

The Cold War was back on, with CIA in true control of the American Government.

Here is a photograph of LBJ winning the presidency through CIA murder, winking to Texas Congressman Al Thomas, back left:

Never mind Jackie’s tears or her future Post-Traumatic Stress Disorder from seeing her husband brutally murdered by her own government spies.

The Warren Commission overseen by Warren, led by Kennedy-fired Allen Dulles, was supposed to investigate and report on Kennedy’s murder and surrounding crimes.

It was instead a large-scale prosecution of the late Lee Harvey Oswald without a defense, violating the 6th Amendment of the U.S. Constitution.

Dulles and the Commission seemed to say: “We must show our nation to be strong and win the Cold War.  We cannot have a Coup on our record—we’d be like other nations.”