Time’s Michael Scherer Got It 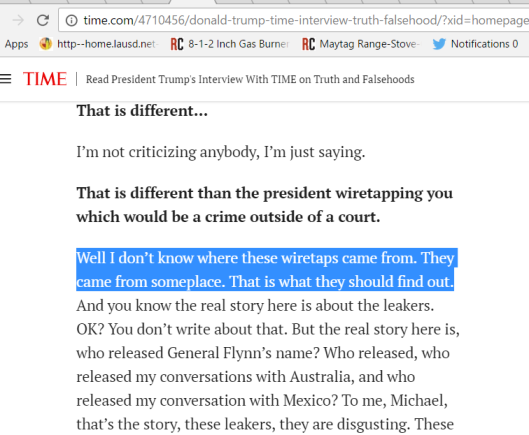 Trump made “declarative” statements on Twitter accusing the previous president, then asked Congress to… “PROVE IT?”

Terrible! Just found out that Obama had my “wires tapped” in Trump Tower just before the victory.

This is Nixon/Watergate. Bad (or sick) guy!

Now, the world minus Donald Trump seemed to think those tweets were inaccurate from the moment they were made.

The White House offered British intelligence meddling as a smokescreen at one point, conjuring James Bond, but as happens to so many Trump claims over the years—the smoke cleared to reveal a baseless claim.  And a British rebuke.

Lack of evidence plagues a troubled Trump who on March 4th tweeted that last bit of darkness out of a lonely Florida sky, a day after filmed arguments at the White House.

A day after Sessions “recused” himself to avoid getting fired for lying to Congress about Russian meetings.

A day after right wing babbling on Obama’s desire to bring Donald Trump down a peg, even through illegal means.

Michael Scherer’s interview yesterday confirmed what many already knew, that the beleaguered subject of a current FBI counter-intelligence investigation sitting in the White House had made up his March 4th tweets, without evidence.

Among other grandiose claims, Trump predicted House Intelligence Committee Chairman Devin Nunes would have new information on “wiretapping” soon.  Was that because Trump himself had initiated the unorthodox Nunes play?

Mr. Trump diverted toward this bash of Time magazine, mixed with self-praise:

And then TIME magazine, which treats me horribly, but obviously I sell, I assume this is going to be a cover too, have I set the record? I guess, right? Covers, nobody’s had more covers.

Scherer didn’t give, issued the apparent 2016 beneficiary of a Russian cyber-attack on Hillary Clinton’s presidential campaign this pregnant push:

Trump got angry, cited a January 20th New York Times story that mentioned “wiretapping,” berated his interviewer Mr. Scherer, making another prediction that the Time writer would “write a bad article because you always do.”

And then they just had a news conference now where they turned out, you watch. You watch.

That is different than the president wiretapping you which would be a crime outside of a court.

And that was it.

Michael Scherer went into the history books yesterday because of Donald Trump’s next admission, under pressure from what he would call “the fake news media.”

It could have been Peter Alexander, Hallie Jackson, Ayesha Rascoe, Margaret Brennan, Glenn Thrush, Jonathan Karl, John Roberts, or any other noble reporter—who had all been close to pushing Trump and Spicer over the edge into that most scary place for some inhabiting 1600 Pennsylvania Avenue:  Truth.

But it was Michael Scherer of Time magazine who got his subject to finally break.

Trump was cornered, but did not know it.

Lawyers, Journalists and Cops worth their salt know logic.  Know discrepancies in story. Know fallacies in argument.  And pounce when they do.

Well I don’t know where these wiretaps came from.  They came from someplace.  That is what they should find out.

To recap, Mr. Trump began with a couple clear declarative Twitter statements on March 4th that accused the former president, Barack Obama, of wiretapping him.

Scherer helped us find out Trump is full of it again, and we might soon find out more of how he cheated with Russians to beat a strong Hillary Clinton in the compromised 2016 election.

The only “Nixon/Watergate” is coming down the Dakota Pipeline, through the FBI and out Trump Tower like a neck through a noose.

We have a decent country, one that needs to pay its debts to Native America, descendants of slaves, the Kennedy family, a lot of banks, world-wide—

And now to Hillary, who Russia and probably Trump robbed in November of 2016.

On the morning of March 4th, Trump claimed to have “just found out” Obama committed a crime and that Obama was a bad (or sick) guy, then admitted to Michael Scherer yesterday, nineteen days later–that he believes in the crime, but does not know who did it.

Still no apology to Barack Obama.